Farmaceutica REMEDIA, Once Again on the 1st place in Top Companies Hunedoara 2013 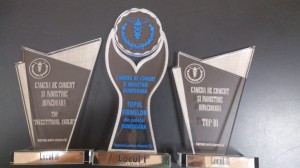 Farmaceutica REMEDIA was once again the winner of the 1st place in the retail category within the anniversary edition of the Gala organized by the Chamber of Commerce and Industry of Hunedoara on November 15th, 2013.

For its remarkable results achieved in 2012, Farmaceutica REMEDIA got another two distinctions, namely:

2nd Place – Investors ranking of 2013, for substantial investment in development in 2012

Furthermore, Farmaceutica REMEDIA received the Diploma of Excellence for outstanding economic results obtained in the financial years 2010, 2011 and 2012.

The Gala honoring the best performing companies in Hunedoara County is an annual event organized by the Chamber of Commerce and Industry of Hunedoara. In the current edition more than 12,000 companies applied, out of which 815 were able to qualify in the top. 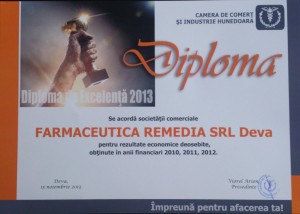